Team USA for the Racketlon world cup has been assembled! The first Tri Racket Dubs Tournament came to NYC with a successful showing of all kinds of talent! Canary Islands is no longer just for relaxing, USA Racketlon Team Captain Patrick Moran and Team Member Noel Mathew bring their A game to Club La Santa, both placing in the top 3 in their group! Spotlight on USA Team Member and squash coach, Joanne Schickerling.

It went down at the NYC Tri Racket Dubs Tournament!

Was amazing to see Nick Matthew, former world squash champion, host a racketlon tournament and give it a go! Hope to see other pros test their racket skills in the future!

We had 24 athletes travel to compete at the inaugural Waterline Square doubles tournament. It was a single-day event, balls were crushed and pizza was consumed. We had so many talented individuals that included masters squash champs, D1 tennis players, national level table tennis players, and coaches in each sport duking it out. Look out for future events! The winners are listed below: 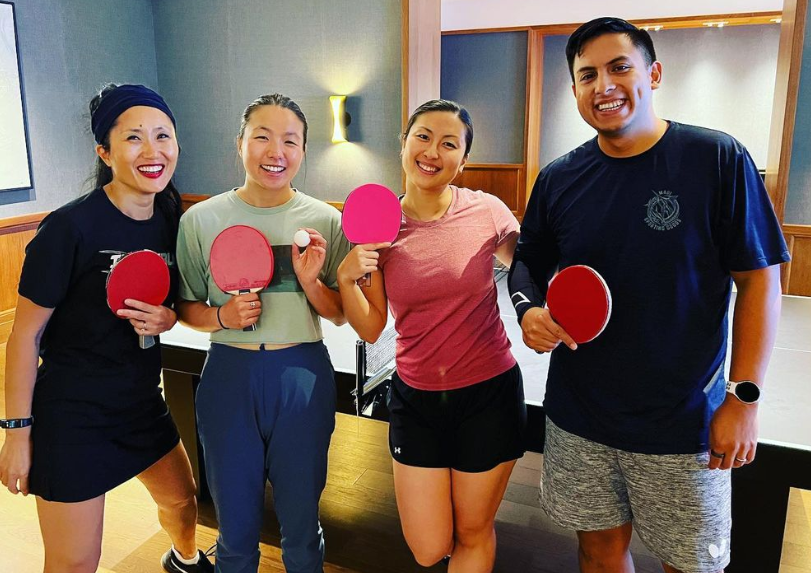 Division 1 – The dynamic duo of Shree and Joanne took down Dora and Alex in the final match by the slimmest of margins.

Division 2 – Rohan and Noel proved too strong for the field. The impressive thing about their win was the fact that this tournament did not include their strongest sport of badminton.

Division 3 – Flora + Mary edged out Felipe + Christine by a single point in the deciding match. Drama!

Canada Corner – Laplante has proven he is still on top

On May 28, in Granby, Qc, racketlon fans gathered for the first event on Canadian soil since the pandemic. Three categories were contested: A, B, and C.

In the A, the final featured a battle between top-seeded player Pat Laplante and elite badminton and tennis player Maxime-Rome Gosselin. Maxime won badminton easily while Patrick did the same in table tennis and squash. Pat had already scored enough points before tennis to capture the title. Jeremy Easterbrook got third by defeating top junior table tennis and badminton player Guillaume Blais.

In the B, the very experienced Dany Lessard lost a very close battle to tennis expert Charles Normandin. Dany was not able to score the needed 10 points in tennis. 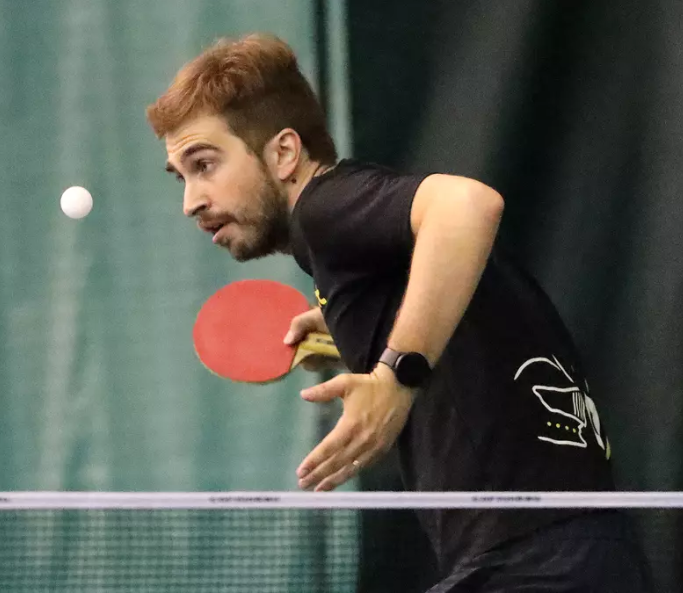 The C division was mixed and Line Bellerose showed the young men that her experience and talent was too much to handle. Frederic Fontaine finished second.

The awards ceremony was held after a visit to the convenience store ‘cause it’s always 5 o’clock somewhere…Many thanks to Richard Soucy and Patrick Laplante, the tournament directors. Check out images from the day here.

In December, Noel and Pat traveled to the Canary Islands. Club La Santa is an amazing venue – highly recommend everyone goes if you get the chance. Perfect spot for an active vacation! Noel and Pat came 3rd in the men’s B doubles draw after a few tight matches. Noel won all of his singles matches to claim his maiden international title in men’s C singles! Pat and his awesome German partner ended up taking home the title in mixed B doubles after battling a talented field of badminton specialists. Noel and Pat were lucky enough to gain many learnings from our awesome roommate, Anna-Klara – women’s world #2. 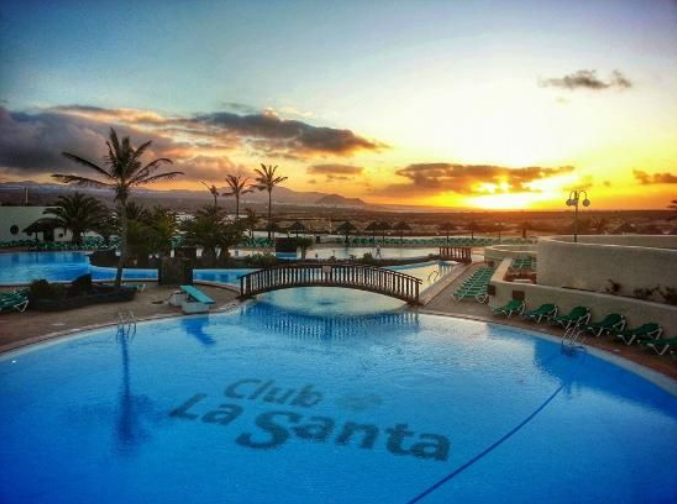 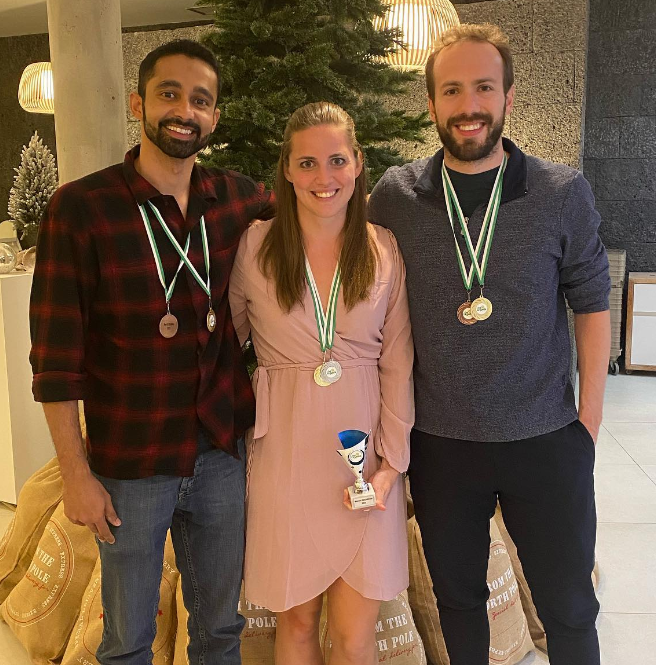 Look out for the return of La Santa this December! Book your room at this dream destination for racket enthusiasts ASAP! More info can be found here.

Americans on the move!

Team USA will be repped by 6 NYC-based players! Steph Chung, Pat Moran (Captain), Joanne Schickerling, Alex Porush, Noel Mathew, and Shree Dhond. For Alex and Joanne, this will be their debut on the Racketlon World Tour! Noel and Steph look to build upon their international success last year in Prague and the Canary Islands by representing the national team for the first time! Shree will be returning to rep the stars and stripes for a 2nd time after being part of the team that finished 4th in the Challenge Cup back in 2019 after a hard-fought battle vs. Germany. Pat returns for his 3rd Team World Team Event. Can team USA do one better this go around and secure their first ever World Team medal?

If you have any interest in traveling and competing on the World Tour – remember, they have divisions for all ages and levels. Find out more info here.

Open Squash is an official partner of USA Racketlon. Their mission is to make squash more accessible to the general public! With 5 state of the art courts + an amazing location in the heart of NYC, we highly recommend checking them out next time you want to play squash in the city. Who knows, you may run into some other Racketlon players while you are there! They have helped us introduce more racket athletes to squash through amazing training clinics for beginners and enabled us to conduct singles and team leagues for Racketlon in NYC! Thanks, Open Squash for all you do!

So far this year we have had racketlon fun days in the city at a few different locations where anyone can join and we have casual games! Keep your eyes and ears open for the next one! 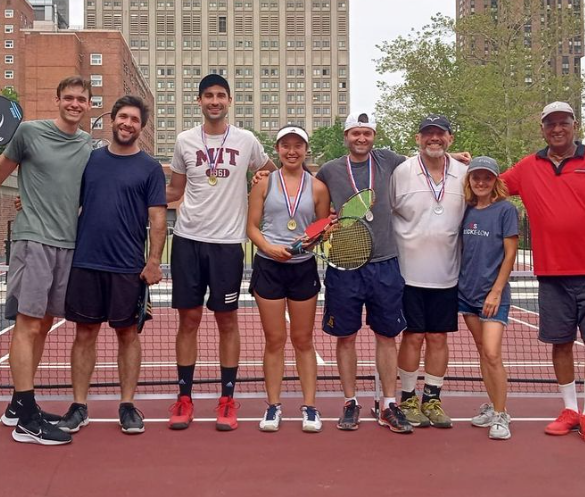 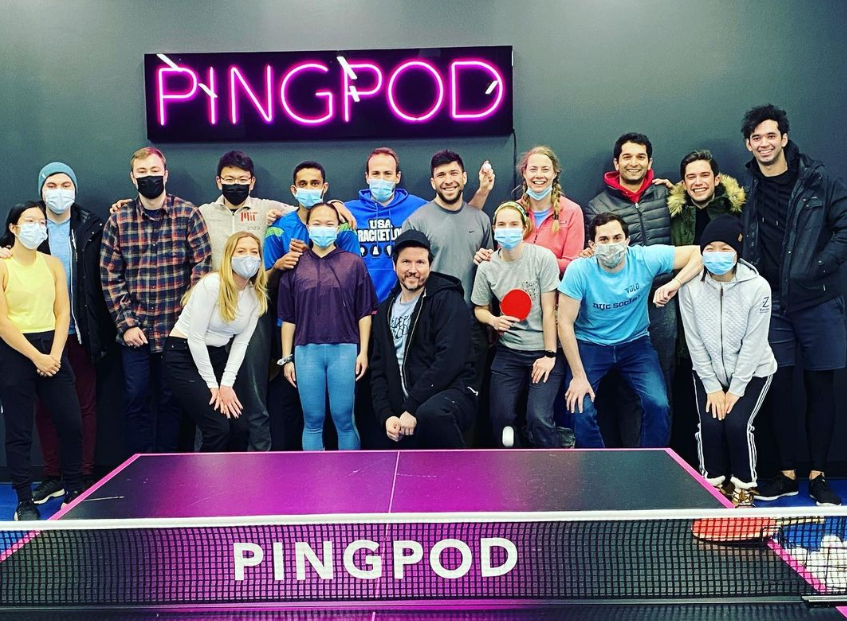 Another epic racketlon tournament went down to kick off 2022 at Elevate Fitness in upstate NY! With an attendance of 38 local participants (including 15 first-timers). We want to thank all of you who went out of your comfort zone to give something new a shot AND EVEN MORE SO those veterans who put out a good word about it to get others to try it.

We had some incredible battles throughout the weekend, including a cathartic gummi-arm point post-car accident (sorry Bryan), a 3-way tie for second place in the B+ dubs, and BY FAR the most competitive tennis level we have ever seen at a racketlon tournament. In addition, the tournament introduced the 40+ singles draw and father/son doubles for the first time!

Rapid-fire results! Tyler Glowaki took the B+ crown after a quality final. The Funicello’s won the father/son dubs! The dynamic duo of Bryan Shaffer and Mike Sobolewski won the coed C dubs. Eric Shear and Dominique Canale teamed back up to win Dominique’s 2nd consecutive doubles title in the advanced category – the woman can’t be stopped! Jon Westfall showed off his all-around skills in the 40+ division to bring home the championship. Lastly, the Coed C and D singles titles were secured by Kevin Russell and Brett Holtzman!

Hope to see you all again at future tournaments. Till then, keep whacking! – Justin

Joanne was born in Pretoria, South Africa and moved to the USA in 2004 for College and is now the Associate Head Coach for the Columbia Men’s and Women’s Squash Team.

Joanne grew up in South Africa surrounded by sport and was an avid cricket player until she found tennis at the age of 11 and got hooked. Being such a late starter but determined to be the best player in the country with dreams to play in the US, she started training every day and joined the High-Performance Center at the University of Pretoria at the age of 14. Slowly she improved each year and by her senior year of high school was selected as # 1 for the South African Schools National Team and ranked as high as #6 nationally.  This led to her being recruited to Indiana State University on a full tennis scholarship where she played for 4 years while studying to get her degree in Exercise Science. She helped lead her college team to win the Missouri Valley Conference and qualify for the NCAA DI National Championships.  Her and her doubles partner were also ranked as high as #24 in the country.

As for squash, Joanne’s parents were both active squash players at their local club where she would spend a lot of time and her mom being a squash coach, she decided to give the sport a go when she was around 15. She loved how fast and fun it was, less pressure than tennis, and found it to be a great break from tennis but an excellent source of cross training and so started playing more and more. Before she knew it she was beating all the top juniors in South Africa within a year and also made the national junior team and was ranked #6 nationally by her senior year. While everyone was saying you can’t play both tennis and squash she was doing both every day!

After college Joanne started her coaching career at Trinity College in Hartford, CT, coaching both the Squash and Tennis team’s while also traveling and playing on the pro tennis circuit. In 2013, she moved to New York to take the Assistant Squash position at Columbia and was soon promoted to associate Head Coach, coaching both the men’s and women’s teams where she helped lead the team to an Ivy League title in 2018 and both teams to top 5 in the Country.

It would not be until almost 10 years later that she would be introduced to racketlon and realize there was a community that promoted and encouraged playing all the racket sports. Since then Joanne has been working on improving her skills in ping pong and badminton and since she is such a quick learner we can’t wait to see how far she takes her game in those two. For the first time, this year Joanne will be traveling with Team USA to the Racketlon World Championships in Austria.

Fun Facts: Joanne has 3 brothers all also super athletic. One is a top squash player and coach in South Africa and the other two recently took up padel and are on the South African National Team.